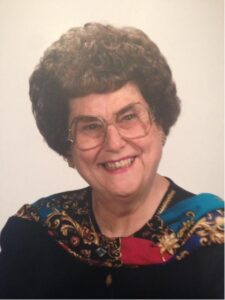 Theis, Carol Holt, 81, of Farmers Branch passed away on August 14, 2014 at her residence.  A memorial service will be held on Thursday, August 21 at 10:00 am at The Chapel at Round Grove United Church of Christ, 248 E. Round Grove Road, Lewisville, Rev. Dr. Byron Wells officiating.

Carol was born on Halloween, October 31, 1932 in Philadelphia, PA, to Harry and Bertha Holt.  The youngest of three children, she enjoyed an idyllic childhood in Lansdale, PA.   A graduate of West Chester State Teacher’s College, Carol married Glenn William Theis in 1955, after falling in love over a tennis match where she trounced him 6-0.  Her first two daughters Jody and Gretchen were born in Pennsylvania.  They lived on the East Coast until the early 1960s, when the young family moved to Houston, and later to Dallas, where their third daughter Colleen was born.

Carol was a resident of Farmers Branch for 50 years, where she was involved with the community and made many friends who became part of the extended family, including her dear neighbors and lifelong friends Joan and Dick Nelson.  She was an active member of St. Paul’s United Church of Christ in East Dallas.

Although she retired from teaching to raise her children, she was still very active with her own three daughters and enjoyed her grandchildren immensely.  She had a magical way with young people, and touched countless lives. Her nurturing spans generations, and those who knew her each have their own stories of her thoughtful and creative way to make the everyday exciting.

She was famous for dressing as a witch on Halloween to greet the neighborhood children, as well as to celebrate her ‘orange and black’ birthday.   She created elaborate themes and games for birthdays and outings, organizing trips to places ranging from the horse farm to Six Flags to the local library. She was a Girl Scout Troop Leader for many years, alongside her dear friend Jo Shuptrine.

There was always action at her house, and the more the merrier.   She passed on songs, stories and dances from her own childhood, and created an ‘open house’ atmosphere for family and friends.  She hosted kids’ sleepovers, campouts and backyard parties.   The neighborhood kids from near and not so near would regularly come to jump on the infamous trampoline, as long as they had a permission slip from their parents.

Carol was a sports fanatic, and played field hockey and basketball in school – earning her the nickname of ‘Gunner.’   As an adult, she was a mega spectator, following many sports, saving her highest regard for the trinity of baseball, football and basketball.   Right up until the end of her life she could quote statistics with awe-inspiring speed, depth and accuracy, leaving younger people with their jaws open.

After her husband’s death in 1993, Carol took to traveling with her friends from the Farmers Branch Senior Center and had immense pride in her growing collection of memorabilia from across the USA.

The Senior Center was an important social outlet for her, and also allowed her to give back others.   She played in the ukulele troupe, performing regularly on the nursing home circuit.

Up until the end of her life, she was the center of our extended family and central to all occasions.   She was recognized internationally for her skill at making the perfect deviled egg, and always had a few dozen on hand for family gatherings.  She attempted, without full success, to pass on this art and secret recipe onto her own children.   She gamely participated in holiday antics with the family, even doing a recent star turn as ‘Rappin’ Nana,’ backed by her five grandkids and singing ‘I Ain’t Got Nothin’ For Christmas.’

She had an incredible memory and was a meticulous record-keeper.   Her home is a shrine to our lives and within her writings and recordings, but most of all in our hearts, her spirit is preserved for generations to come.

Those wishing to make a charitable donation in her honor may do so at www.diabetes.org.

Please send condolences to the family on this site.

One condolence on “Theis, Carol Holt”

Sending our condolences to all of Carol’s family. Ted and I have many memories to treasure. She and Glenn opened their home to us when we moved to Texas and helped us acclimate to life in Texas. We are sorry that we can not be there to celebrate her life with Colleen and Jody and the grand children. We love you all so very much and send prayers to comfort you during this time. Hugs, Aunt June and Uncle Ted