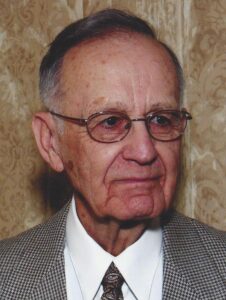 Morris Ethridge, born February 7 in 1921 in St. Louis to Josephine and Norman Bush Ethridge, graduated from Central High School in Memphis. He began his studies at Howard College in Birmingham, before putting them on hold in 1942 to volunteer for the army air corp, where Captain Ethridge was awarded the Distinguished Flying Cross and the Air Medal with Cluster for his 72 missions (a number of them across “the Hump”) as a B24 pilot with the Flying Tigers. He continued to serve as assistant operations officer until his retirement in July, 1945. After his military service, he met his wife of 67 years, Marie Raiford, upon his return to Howard. They married in December, 1946. He worked as a buyer and sales manager for Chambers Lumber Co. in Dallas, Midland, Lubbock, and Levelland, then became a custom home builder in Dallas and was a member of the National Home Builders association for 33 years, the co-owner of Jenco Wholesale Nursery, and a founding director of the Provident American Insurance Company and the First Bank of Coppell. A 32nd degree Scottish Rite Mason for over 60 years, he also taught Sunday School, served as a life deacon, and spent 40 years as a teller for Park Cities Baptist Church. He gave back to his community through decades of hospital visits and trips for Meals on Wheels. He passed away peacefully at dawn on the morning of September 17, 2014, in Dallas. He is survived by his wife, Marie; daughter, Deborah and husband, Craig Sutton; grandson, Montgomery; and sister, Joan. A memorial service will be held at 3pm on Friday, September 19, 2014, at Park Cities Baptist Church, Ellis Chapel, with reception to follow. Please direct any memorials to Park Cities Baptist Church.

One condolence on “Ethridge, Morris”

walt and I were so saddened to hear of mr. ethridge’s passing. we always enjoyed visiting with him when we were at the magee’s house. he was such a gentleman with so many talents. he will be missed. we will be thinking of you and Debbie. love, walter and celia magee