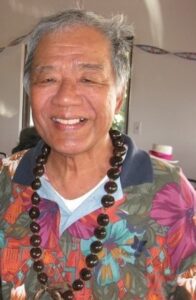 Oseas Yabes Tumbaga “Osh” died peacefully at Zale Lipshy University Hospital on October 27, 2014, in Dallas, Texas at the age of 78.

Osh was born on April 7, 1936, in the Phillipines to Daniel Farenas Tumbaga and Maria Yabes Tumbaga.  He graduated from Waimea High School in 1956 and would complete his Bachelor’s of Science degree nearly 20 years later.   In December 1965, Osh married Linda Faye Hamilton, a young nurse he met at their workplace Timken Mercy Hospital in Canton, Ohio.   Over the next six years, the couple welcomed three children into their home and Osh set about teaching them to be independent and self-sufficient.

After a particularly harsh Ohio winter, the family moved to Garland, Texas in the summer of 1977 and Osh began work as a microbiologist in the lab at Methodist Hospital of Dallas.  Osh and Linda separated in the early 90’s and finalized an amicable divorce in 1994.  In May of that same year, Osh married Aurora Acevedo in a ceremony held at Methodist Hospital surrounded by their co-workers and friends.  In the twenty years of their marriage, they would see their blended family welcome 10 grandchildren: Austin, Alfredo, Alise, Angela, Cecelia, Jennifer, Kayla, Kenny, Kraig, and Matthew; and 5 great-grandchildren: Joey, Joseph, Landon, Liberty, and Vivian.  He is remembered by his children, grandchildren, and many nieces and nephews as a loving man who encouraged them to pursue their goals and dreams, to always strive to live up to their potential, to never stop learning, to work hard, play hard, and love their family.

Osh was accomplished at chess and enjoyed playing against the computer set at the highest level of difficulty enjoying the portability of his games through his phone and Aurora’s iPad.  He loved watching the Cleveland Browns and the Dallas Cowboys as well as watching history unfold at the Olympic Games.  He was proud to have trained the first American Kennel Club registered St. Bernard to be conferred the Utility Dog obedience degree in both the United States and Canada and earning the a spot in the St. Bernard Hall of Fame in 1969.   He was passionate about continuous learning and the love of family.

In lieu of flowers, please send donations to UT Southwestern Medical Center, Office of Development, P.O. Box 910888, Dallas, TX 75391-0888 or online at http://www.utsouthwestern.edu/donatenow.  The family would like to thank Dr. Rickert and the Zale Lipshy University Hospital team for their dedicated and compassionate care.

My prayers and sympathy to the family. I know he will be missed by everyone who knew him.

So sorry for your loss. Osh was a good man and great neighbor. Prayers for the family at this difficult time. Remember this is not goodbye. Only see you later.

Manong, Big Brother. We,LOVE YOU and We, will MISS YOU. LOVE & ALOHA. MYRNA & “HOBIE” TUMBAGA and Family/Ohana. Kekaha, Kauai, Hawaii

My prayers and sympathy for the family.

We are extending our sympathy to your family at this difficult time.
Our thoughts and prayers are still with all of you.
On Saturday we will remember Oseas as a good man with a loving family as you take him to his resting place at the time of services.

I’ll love and miss Papa Osh.
You brought smiles and happiness to our family you will be missed by generations.
My son Austin has spent many a night speaking of is grandpa, especially when he slipped him a 10 dollar bill after a good weekend at the casino.
May you always hit jackpots in heaven!!

I will miss you Osh. You were such a good father in law. You were my favorite person in the family. I will miss your laugh and your smile and your humor! You’re the only grandpa Austin knew and he saved every penny you gave to him. The last time you talked was about 2 or 3 weeks before you fell I’ll and you told me to give Austin the cash in your hand and you said” mom and dad can give you money, but it’s more special when it comes from GRANDPA!” I love you mother Osh! Aurora always said your name like that!! I will miss you dearly! Love Kristi

Thoughts and prayers are with the family at this difficult time.

Uncle, Oseas , I not only admire you for being such a wonderful husband, to my mother, Aunt, friend, I know you will watch over her, and I will hold her hand, to comfort her and guide her..you will be missed, but never forgotten”You mother” RIP ♥ luv Eva, Nasim, Elia, and Azim:)

I send my sympathies, thoughts and prayers to the entire Tumbaga family. I was very young when Oseas left Kekaha – my only memory of him was at one of the family parties; but talk of him was always heard among family and friends. May your memories bring you comfort. Janet (Mamaclay) Moder

MANONG ~~
YOU lay there hopelessly and so unlike you!
I tried to get you to speak and to open your eyes … but you could only squeeze my hand.
It is so like you to leave on your own terms and time.
The folks up there were surprised to see you so soon, but you explained that Apo Dios called you home.
YOU will live on in our hearts ~~
Push my buttons once in awhile, your Sis R

Sorry to hear this!Oseas was one of my favorite coworkers at Methodist.I will never forget him.Condolences to all the family.

My dear grandpa Osh, you will forever be in our hearts. And deeply missed. We love you and know you are shining down on us. You always knew how to put a smile on our faces. You didn’t know a stranger. I have only good laughing memories of you. It’s not goodbye. Its I will see you later in paradise:)

My dear grandpa Osh, you will be forever missed and loved by all of us. You never knew a stranger. You always knew how to put a smile on my face. I only have good laughing memories of you. I know you are in heaven shining down on us and telling everyone your funny jokes:) God said he needed his funny angel back. it’s not goodbye. It’s i will see you later in paradise. Loves always, Angie, Vivian, and Grant

MANONG:
YOU lay there hopelessly ~~ so unlike you!
I tried to get you to speak and to open your eyes ~~ but
you could only squeeze my hand.
It is so like you to leave on your own terms and time.
The folks up there were surprised to see you so soon, but you explained that Apo Dios called you home.
YOU will live on in our hearts!

PUSH my buttons once in awhile … your Sis R

May the peace of God and His immeasurable love cover this beautiful family during this time of loss. I pray that the Spirit of God will comfort and guide you in the coming days ahead, and that you can rest assured He will be with you each step of the way.

I miss you so much, you taught me so many things grandpa and you always pushed me to learn more. It is thanks to you that I am studying biochemistry and I can never thank you enough for that. From a young age I knew what I wanted to do and thank you for encouraging me to do so. I love you.