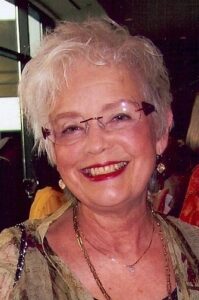 Born January 23, 1944 in El Paso, Sherry grew up in Tyler, where her parents, the late Isadore and Pauline Heffler Roosth, moved to join his family’s business.  She studied at the University of Missouri  School of Journalism and earned her B.A. in Journalism from the University of Houston before beginning a long marketing and advertising career.

She began as advertising director for Foley’s Department Store in Houston, Sherry moved to Dallas for a similar position with Joske’s Department Store, later also serving as copy chief for Bombay Company in Fort Worth.  She then became a   consultant to clients in specialty retail, the printing industry, and the non-profit sector, before joining the Jewish Federation of Greater Dallas as a marketing associate.

Sherry continued to contribute her skills to the Federation as a volunteer in many capacities.  Meyer Denn, executive director of its Center for Jewish Education, praised her “passionate advocacy,” citing Sherry’s ongoing commitment to the Center’s annual LearningFest, its Tycher Library, and youth scholarship programs.  At her death, she was still a member of the CJE’s Advisory Committee and on the Board of the Dallas Jewish Historical Society, which she had served earlier as newsletter editor.

Sherry also furthered her own education through local courses offered by the international Melton School of Adult Jewish Learning. After completing its two-year core program, she continued with several years of graduate work while serving on its Advisory Board, assisting with communications efforts.  “Sherry was smart, engaged, always finding something of interest,” said Director Rachelle Weiss Crane.  “She will be missed.”

In lieu of flowers, contributions may be made to the Jewish Federation of Greater Dallas’ Center for Jewish Education, Florence Melton School, the Dallas Jewish Historical Society, Ahavath Achim Synagogue, Tyler TX, Dallas Symphony Orchestra or to a charity of your choice.

Funeral service will be held at Stewart Family Funeral Home on Monday morning, January 12, at 10:00am followed by burial in Ahavath Achim Synagogue Cemetery, both in Tyler, Texas.   Messages of condolence may be posted to http://www.stewartfamilyfuneral.com.

Please send family condolences and sing the guestbook on this website.