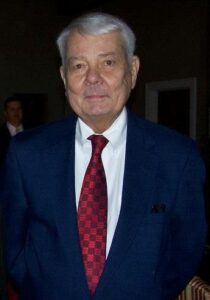 Ben F. Maca, age 73, died peacefully at home in Dallas, on January 8, 2015. He was born in Dallas, Texas, on October 18, 1941, to Joe and Vlasta Prevratil Maca. Ben grew up in Dallas, where he attended Rusk Junior High and North Dallas High School. He graduated from North Dallas in 1960, and from North Texas State University in 1966, where he was a member of the Kappa Alpha Fraternity. He began his career in real estate appraisal and evaluation, and then became a sales representative in the transportation industry for several freight companies until he retired in 2004. He was very active in the American Sokol organization, serving as president of Sokol Zizka (Dallas), as president of the Sokol Southern District for several years, and as coach of the Junior Sokol volleyball team at the Dallas Sokol.

He is survived by his wife Georgia Ann ‘Gay’ Maca; his daughter Robin Sue Maca and husband Stephen Reitz of Austin, Texas; his step-children Richard Steele and wife Carol of Carrollton, Texas, Elizabeth Raveling and husband Philip of Falls Church, Virginia, Robert Steele and wife Dina of Carrollton, Texas; nephew Josef ‘Bubba’ Maca and wife Dawn of Carrollton; nine grandchildren and a great niece and nephew. He was preceded in death by his parents, his brother Jerry Maca, his sister Joanne Maca, and his nephew Jerry ‘Peewee’ Barnes, all of Dallas.

Dear Gay, I am thinking of you. Please extend my sympathy to your family. I enjoyed the time I spent that day with you and Ben and the dog. I look forward to seeing you. Anne

I’m so sorry Gay. Please let me know if I can help in any way.

Seems like yesterday that i walked into my backyard and met Benny,actually it was 64 years ago.Rest in peace Benny

Rest in peace cousin – although we only met 2-3 times in our entire 70+ year lifetimes you, and cousins Jerry and Joanne, were always inspirations to your California cousin.

Gay and Robin, my sincerest condolences.

So very sorry, but health reasons and time will not allow me to attend the services. I still do plan a trip to Texas in late Spring this year.

Gay, I am so sorry to hear of your loss. Extend my sympathy to your family. Drop by sometime when you are in the neighborhood. Alice

Gay, I am so sorry to hear of your loss. Please extend my sympathy to the family. Take care. Alice

My condolences to Gay and the family!
I will always remember Benny’s smile and all the fun at Rusk and North Dallas. RIP Benny!!

I knew Benny from 1st grade thru 12th grade. Remember him vividly at Obdiah Knight. He will be missed. Prayers for all family members

I’m so sorry for your loss. I first met Benny as well as his whole family in SOKOL activities in my early teens. It was a surprise when we met again at North Dallas. Even though I have not kept up with him & his family I always admired him and feel this is a great loss to all those that knew him & cared for him.Sincerely, Jodie Bawcom

Gay, My deepest sympathy to you and your family for the loss of your husband.

Bubba and family, we are so sorry for your loss. I know your Uncle was an important part of your life and will be miss.

Benny was a special member of the Class of 1960 at North Dallas High – never one to pass up an opportunity to do something fun or mischievous — he will be missed. Prayers and heartfelt sympathy to his family.

Dear Gay, our deepest sympathy to you and your family. We have only the fondest memories of Ben and his most eloquent “southern drawl.” Our thoughts and prayers are with you. All our love, Chris, Luke and family

Gay, Bubba and all, Remembering back to the “good old days” I can honestly say I will always cherish the time I roomed with Benny in college, his fun-loving-nature and amazing smile. My heart goes out to all of you. Cousin Joe

I’ve not been in touch with Benny in years, but I remember him as a gratious, caring person. I attended weightlifting competitions at the Dallas Sokol and many a wedding at the Sokol in Ennis, which is where my family is from. I attended Obadiah Knight and T J Rusk, as well. Time marches on and each of our names get closer to the top of the list. Rest in peace Benny and prayers for your family.

So, so sorry to hear this. He was one of the nicest guys I’ve ever known, and I can’t think of a time I didn’t know him. Rest in peace, Benny.

Banny and I attended the same schools all the way from Elementary to Jr High and on to High School and College.
So sorry for your loss.

Gay and family,
My thoughts and prayers are with you as you celebrate Ben’s long life. I knew him from a very young age we attended Sokol Dallas together. Lots of good memories of those times and with his family.
Peace,
Cathy {Smith} Emrick