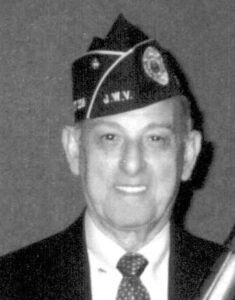 Hillel H. Perlstein passed away on January 20th. He was born in Dallas in 1919.

He was preceded in death by his loving wife of 60 years, Ann. He is survived by his sons Marshall and Bruce ( Judy); grandchildren, Allison Perlstein and Melissa Hiller (Chris); great grandchildren Maya and Isabel.

He proudly served in the Army during World War II and was a Purple Heart recipient. He was also a member of the Jewish War Veterans.

A graveside service will be held at Hillcrest Memorial Park on Friday, January 23rd at 11 a.m. with Rabbi Murray Berger officiating.

I had the honor of meeting Mr. Perlstein at North Central Urology and he was always one of my favorites because of his love for life and vibrant attitude. My prayers are with you Mr. Perlstein, and your family.

There are no words to describe the sadness I feel over the loss of such a great and compassionate man. Hy was always about helping out his friends, neighbors and even complete strangers. I love you Hy and you WILL be missed!!!

Hy lived with PASSION! He was one of The Greatest Generation. Hy,your devotion and love for family, friends and for country was evident throughout your life, and you defined having a ZEST FOR LIFE! I will miss your wisdom, sense of humor, and your amazing Chicken Soup! It truly was THE BEST on the Planet! You were timeless. Ageless. I feel so lucky to have known you, and I will miss you very much. Our world is better for your having been a part of it. Much love… <3

Marshall and Bruce, our sincere condolences to you and your family. Uncle Hy was a wonderful man. Tony and I are so happy that we were able to see him and you Marshall 3 yrs ago when we were in Dallas. I have so
many wonderful memories of the time we lived in Dallas and time we spent together.
You were a kind , gentle, strong, loving, caring and thoughtful man. You always were neutral no matter what wsd going on in the family. I love and respected you for that. Thank you for loving me unconditionallly no matter how much time psssed between our calls or visits.
You will be missed! Love you! Rest in peace! Marsha and Tony
,
, May u rest in peace

Dad,
Dad, We think of you often. Your void will never be filled. I don’t know if you ever knew how much we all loved you. Marshall and I will be visiting you and mom on your 98th birthday and Mothers Day this Sunday. We miss the both of you. God Bless.