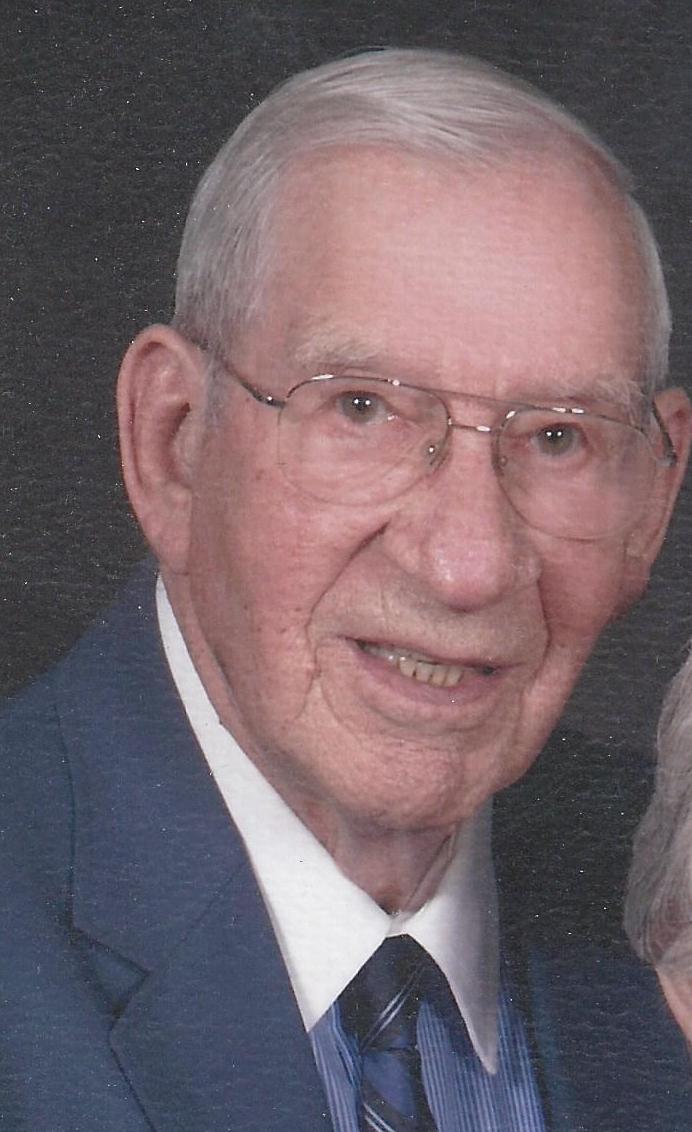 B.H. (Bill) Clampett passed away January 19, 2015 after a short illness. Bill was born November 6, 1924 in Mayfield, Kentucky.  His parents were Charles Wickliffe and Jency Higgins Clampett.

He is survived by his children, Stephen and Cynthia Clampett of Farmers Branch, Texas, Laura Clampett of Kenosha, Wisconsin, Charles Clampett of Saint. Louis, Mo., and Robert and Kathy Clampett of Carrollton, Texas. He is also survived by five special grandchildren and two exceptional great grandsons.

Bill is preceded in death by his sister Dorothy Sue Mitchell, his parents, and his loving wife Martha.

Bill graduated from Mayfield High School in 1942 and entered military service in 1943.  He was serving with the 99th Infantry Division (one of the few divisions holding the Ardennes Sector) when the Battle of the Bulge began in December 1944.  He was wounded during the battle while his division held the ‘northern shoulder’ at Elsenborn Ridge .  After the war ended in Europe, Bill served with the European Civil Affairs Division until his discharge in March, 1946.   Bill was awarded the Combat Infantryman’s Badge, the Purple Heart, and several campaign stars.

Bill graduated from Washington University School of Law in 1950 and began practicing immediately in Springfield, Missouri with Judge A.P. Stone, Jr.  From 1954 until his retirement in 1994, Bill practiced law with the firm known at the time as Daniel, Clampett, Lilley, Dalton, Powell, and Cunningham.  Bill handled many appellate cases, both in the Missouri Supreme Court and the Missouri Court of Appeals, Eastern District.  Bill was known as a “lawyer’s lawyer”, and was considered one of the best appellate lawyers in the state of Missouri.  He was President of the Greene County Bar Association in 1960 and later served as a Trustee of the Missouri Bar.

Bill married Martha McAlister, also of Mayfield, Kentucky on November 27, 1948, and they moved to Saint Louis, Missouri while Bill finished his law degree.  After moving to Springfield, where Bill and Martha spent 53 wonderful years together, Bill was active in many organizations, serving on the Board of Twin Oaks Country Club and the Administrative Board of King’s Way United Methodist Church.  In 2003, Bill and Martha moved to Texas where Bill has been an active member of Lover’s Lane United Methodist Church.

Bill will always be remembered for his service to his country, generous nature, quick wit, and love of his family. His other passions included golf, baseball, military history, and collecting antiques.  He was dearly loved and will be greatly missed.

Please enhance this tribute to Clampett, Billy Hal by adding your condolences or memories. Click Here

Our sincere condolences on the passing of your father. Our thoughts and prayers are with you.

Your friends at Deloitte

I was deeply saddened by the news of Mr. Clampett's passing. My heart felt condolences to your family. I, also enjoyed hearing Bob talk about his dad and I pray that the wonderful memories of his amazing life will give the family comfort at this difficult time. You are in my prayers.

I am so sorry to hear the passing of such a great man. I loved hearing the stories Bob would tell of his dad. While no words can truly help the pain that is felt, I hope that knowing you will see him once again, that he is with his wonderful wife, and our creator will help to bring comfort to you.

Thoughts and prayers are with you during this time,
Micki and Scott Wilson

Condolences to the family. A lost is never easy. Taking it minute by minute, hour by hour, Day by day, then weeks will turn into months then months into years you will have all that time to remember and hold dear the happy memories. Hope this helps. With much Love Maria Gonzalez.

Dear Clampett family
I am sorry to hear of your loss.
Bill lived a wonderful and rich
life. God will take good care of him and you continue to take care
of each other.

We are so very sorry to hear of your beloved father's passing. If it is true that children are a reflection of their parents, and I believe for the most part it is, then your father was a most awesome man. What a wonderful tribute you have written for him. We never had the privilege of spending a lot of time with Mr. Clampett but we love to hear the stories you shared of his life.

We pray God's comfort and peace for you during the days ahead.

With all our love,

David and Barb Thrasher and family

What a great man! We loved Bill so much! I always looked forward to his hugs and smiles. One of The Greatest Generation to whom we owe so much gratitude for preserving our way of life.
May you find comfort in sweet memories of time together.