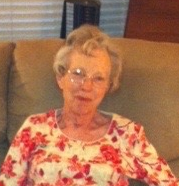 Mary Edith Dant died in Dallas on June 24, 2015 surrounded by her family and loved ones when she went to be with her Lord and Savior.  She spent her final days with her family who loved her dearly.

A Dallas area resident for over 65 years, she was born Mary Hand, daughter of Mr. and Mrs. John Hand, in Chicago, Illinois July 17, 1938 and was preceded in death by her parents and Son-in-Law Scott Tucker.  She was a graduate of Ursuline Academy and received her Bachlors in Nursing from Texas Woman’s University.  After nursing she worked and retired from Halliburton.  She gave her time to her church, being a Extraordinary Minister of Holy Communion.

She loved to sew, write (already having written an un-published book), needle point, and crochet blankets for her family.  She was a loving daughter, wife, mother and friend.

Please enhance this tribute to Dant, Mary E. by adding your condolences or memories. Click Here

Mary was a loving friend to our mom Doris Walker. We are sorry to hear about your loss. While we know she will be missed dearly, hopefully they are taking care of everyone in heaven together.