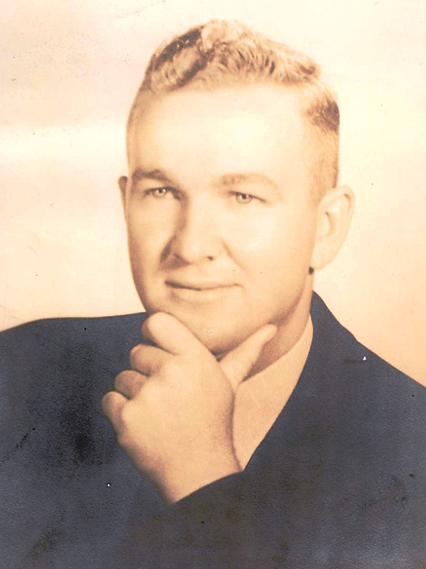 As a young man Joe enlisted in the Navy and served as a Master Sargent in WWII. A honorable patriot always willing to help his country he re-enlisted in the Army and served in the Korean War. U.S. Veteran was a distinction he proudly carried. A light-hearted charmer, Joe always had a story that would bring a smile to your face. He captivated all he encountered narrating the full life he experienced. A disciplined and loyal man, Joe worked for the Southwestern Bell Phone Company for over 40 years. A pillar of strength, and admirable humility, his work ethic and devout faith inspired all he called a friend. He was a founding member of the St. Jude’s Catholic Guild, and active member of the Mary Immaculate Parish for close to 60 years. Later in life he could be found blissfully tinkering around the house- inquisitively in search of a new project, his nose in a history novel, or cheering on his beloved Arkansas Razorbacks. He took joy in constructing anything new in his backyard. Though if you asked him, the proudest thing he ever built was the life and memories he shared with his family. Joseph married the love of his life, Louise Madden on February 14, 1953. While their small towns in Arkansas would never be far from their hearts, they moved to Dallas in 1953 and set down roots to start a family.  Joe and Louise remained best friends and true partners for 57 years.  The love and adoration they shared for one another reminds us all that a life that is cherished and spent alongside the one who completes you is an exceptional gift only granted to few. While he may have passed along his bright blue eyes to each of his children, it was the devotion to family that will remain his greatest gift. Years spent together on camping trips, traveling, or at the family farm will forever be fondly remembered.

Those we love never truly leave us. They echo still within our thoughts, our words and our hearts. They have weaved their presence in our memories and lives, and for that they live on forever.

The Madden family would like to offer their sincerest appreciation for the prayers, love and support shown to Joe and his family. They invite you to celebrate his life in the church reception hall after the service.

Please enhance this tribute to Madden, Joseph Thomas by adding your condolences or memories. Click Here