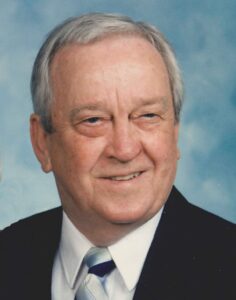 Gilbert “Rat” Rodgers, formerly of Paden City, West Virginia, died peacefully in his sleep on January 16, 2017 surrounded by his family in his home in Farmers Branch, Texas.

The eldest son of Verla and Robert “Cotton” Rodgers, Gilbert was born on April 25, 1925 in Paden City, West Virginia.

After graduating from Magnolia High School in West Virginia, he joined the Navy V12 program at Duke University in 1943. Upon medical discharge from the Navy in 1945, Gib continued his education at the University of Richmond, Illinois Institute of Technology, Texas A&M and received his structural engineering degee in 1958 from the University of Texas.

During his education he played both football and basketball and in his adult years, as a long time member at Brookhaven Country Club, became a scratch golfer and served as a scout master with the Boy Scouts. He practiced architectural and structural engineering for over 40 years as a certified professional engineer in the state of Texas.

He was married to the love of his life for 66 years, who preceeded him in death in 2014, and raised 6 children in their home in Farmers Branch, Texas. He is survived by daughter, Ann (Eddie) Haggar of Santa Fe, New Mexico; daughter, Christie (Michael) Perkins of Austin, Texas; daughter, Janet Rodgers of Dallas, Texas and her twin brother, James Rodgers of Austin, Texas; son, John Rodgers of Grapevine, Texas; daughter, Jennifer (David) Ryan of Dallas, Texas; three grandchildren; Devon, Daley and Jessica; one great grandchild, Maxwell.