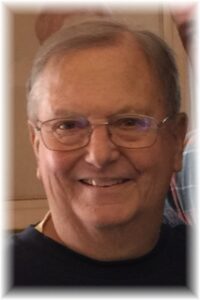 Richard T. “Dick” Cassidy of Addison, Texas, was born February 12, 1941, in Milwaukee, Wisconsin. He passed into peace February 8, 2017, in Dallas.  Dick had a great time growing up in Glen Ellen, Illinois, in the “Happy Days” era.  He also had a great time as a Beta brother at Miami University, in Oxford, Ohio, and studying law at SMU in Dallas.  He enjoyed practicing mostly employment law in Dallas until he retired in 2008.  Dick nourished life-long friendships all along the way, never met a stranger, and pretty much always had a great time.

With the people in his life (as well as the animals), Dick was gentle, inclusive, patient, wise, passionate, and a terrific listener. When Katy was growing up, he was Coach Cassidy, marshalling her soccer teams and winning the hearts of her friends.  He was a walker, sometimes for hours, or just a few minutes.  He and Ellen loved traveling, especially taking their grandchildren on repeat trips to Galveston and Crested Butte, among other places.  He was delighted to discover email and texting, staying in touch with people from all corners of his life.  Once you got on one of his “lists,” you could count on daily mail.  He loved classical music and country music (the Willie and Waylon variety), FOOD, and the Dallas Cowboys (we thank them for giving him the best season in a long time as his last one).  He treasured his friendships, every one of them.

Dick’s brilliant sense of humor was quick, hysterical, constant, and always kind. When he got sober October 15, 1994, he was afraid he would lose that gift.  Not so!  He celebrated 22 years of continuous sobriety and was funnier than ever.   His writing professionally as well as personally reflected his wit, intelligence and quirkiness.  He even made reading minutes from Board meetings something to look forward to!   (Watch for his yet-to-be-published novel, “Red Flags Are Not Party Favors.”)

Dick adored his family, and they adore him still, every one of them. That includes wife Ellen, daughter Katy, step-son Maury Thomas and his wife Carin, grandchildren Anthony Farrer, Alicia Northrop, Tristan and Sutton Lory, and Madison and Kennedy Thomas, step-granddaughter Emily Hickman, brother Larry, brothers- and sisters- and daughter- and son-in-law (past and present), nieces, nephews, and pets (currently Pepe, ChaCha and Taco the Cat).  It also included his parents Paul and Inez Cassidy, step-daughter Melissa Lory, and grandson Cameron Farrer who all predeceased him.

Dick was a peacemaker – he didn’t set out to save the world but to wonder how other people were doing and to care how his actions affected their hearts. Pass it on.

In lieu of flowers, contributions can be made to an educational fund for Dick’s grandchildren either electronically at paypal.me/cassidy1959 or to Ellen Cassidy, 4110 Pokolodi Circle, Addison 75001, noting RTC on the donation.  We thank you for your outpouring of love and support.

You will be missed, my friend. You never failed to give a kind word, wit, and a been there and done that. Rest in peace.

Dear Ellen, Katy, Maury, and all the grandchildren, I am so sorry for your tremendous loss. Dick was had a wicked funny sense of humor, a shaper mind, and a gigantic heart. I will miss knowing he his not with us here but confident he will always be with us in our hearts! Hugs and light, Donna ❤

I had the pleasure of getting to know Dick over the last few years. He made me laugh, and even better he made me think. He was full of wisdom, humility, and didn’t take himself too seriously. I admired how he faced life’s challenges with such grace and dignity. He always had an encouraging word, listened with a caring heart, and was willing to share his experience. I am honored to have known him. My prayers are with all of you. God Bless.

Ellen,
So sorry about Dick. He was a fun guy. Hopefully Karen can come to Dallas soon so we can get together. Take care of yourself and let me know if I can do anything for you.

So sorry, Ellen and family..What a great guy!

RTC….. truly one of a kind! And, I’m among the hundreds of newbies that were privileged to know him and love him. I hear there’s lots of chocolate candy in heaven, my friend! To Ellen, Katy, and family, may you feel the presence of the Holy Spirit comforting you with His love now and always.

I’m so sorry to hear about Mr. Cassidy. I know he was very well loved. May the God of Comfort be with you during this hard time. As you reflect on his life, may the promises of our Almighty God at (Revelation 21:3,4; John 5:28,29) bring you comfort. Again sending my deepest apologies

Dearest Ellen – there are no words but know that we love you and are praying for you and the whole family. Dick left a great legacy and we will always remember his laughter and his love for you! Love love love Kent and Corrie

Ellen and family,
I am so sorry for your loss. I know he will be greatly missed. I pray for your healing, peace, and comfort.

Dick was a man of integrity, great wit,sense of humor, and peace.
He was a firemaker. I will miss him dearly, his smile and presense.
To Ellen and family, we all love you, and are praying for you guys!
Harris sandra Madeline

Dear Katy and Ellen and Families, I have known Dick since he was in High School, thru Miami and when his folks lived in New York, and he brought home a stop sign or one with blinking lights after a night out. My family even lived through the Dallas Cowboys and the letters Dick put out. He was not a happy camper when thek 49er’s beat the Cowboys with the pass. Dick was not only family, but one of the greatest persons I have ever known. His wit, charm, and caring about folks made him a person I will always remember and love. I know how much both of you will miss Dick, but he will always be with you. If there is anything we can do, don’t hesitate to let us know. I know that Dawn plans to be there for Dick’s service. I’m not sure about ReNae. Dick will surely be missed by us. Love, Lynn and Alan

I am so sorry about the loss of dearest Dick. He was so well loved and so loving (and hilarious) in return. He will be very missed by many and touched and helped many more.

My memories of Uncle Dick have always been good and last imprinted when I was probably 12 or 13. I remember him as loving, kind and huggable- much as described here. I’m sad that Katy has lost her father. That security some are blessed to know. When it slips from you a hole is left in your soul, hopefully to be filled once reunited after this life – . God bless family and friends of Uncle Dick. With love, Pamela Manwaring

We will all miss Dick a great deal. One of the good guys has left us.

Love Uncle Dick. Very found memories growing up and visiting Dallas to see Aunt Sharon, Katy and Uncle Dick. The whole family was and always will be quirky and fun. I love you all and pray for comfort and peace as we say goodbye to Dick.

What a wonderful tribute to your dad Katy. Praying for real comfort and peace for you and your family as you miss your sweet dad.

Dear Ellen, Katy, and family. I am thinking of you at this very sad time.

Ellen, I am so sorry your path is so dark today. Please know it will not always be so. God will always be there. My heart goes out to you.

We didn’t know Dick very well but Madison and Kennedy and Laurinda are very special to us. Their saddness on his passing tells us he was a special person. Our sympathy on your loss.

Dick will be missed. He had a marvelous smile and sense of humor. Love and prayers for Ellen and the family.

Sending much love to you all from Australia. Thinking of you all during this time. Such a wonderful man who will be missed by so many people. I am sure his sense of humour lives on through Katy!