Raymond Joseph Reynolds was born in Highland, California on January 17, 1972 and passed away recently at his home in Arlington, Texas.

Following graduation from high school Ray joined the Army and became a medic. He was deployed during Desert Storm and to Somalia. He received various commendations for his service. He later made a career in the nursing and health care services. Raymond is described as a “friendly, funny and charming guy” and as an “amazing employee supervisor.”

Ray is survived by wife, Julie and his four children, Christopher, Cory, Nicholas and Hailey. He is also survived by his parents, Raymond A. Reynolds and Elena Marsh, and by his four siblings, Jim, Eric, Paul, and Marie. 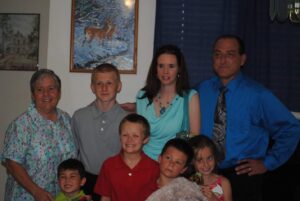 We are so sorry for your loss. We know this is a very difficult time for all of you. Please know you are in our thoughts and prayers. Aunt Mary and Uncle Bob.

My heartfelt thoughts go out to Julie and the kids. Too young to leave, but I pray he’s at peace now….

The loss of this Very Special Man is nothing to easily overcome. RJ’s life story tells it all – Thinking of other’s before himself.. taking on the worries of the World as BIG HEARTED SOULS do
Son, Brother, Husband, Father, Cousin, Friend, Army Medic, Nursing, Healthcare Professional
May He Rest In Peace XOXOXO

Work with Ray in Springfield MO. Was a great guy to have known. Peace my friend.

my deepest sympathy in this “to soon’ death. my love and prayers to the whole family

Our prayers are with the Julie, the kids, and family.

May God Be With Each and Everyone Of You’ll During This Difficult Time.May You Have Peace and Strength Knowing Ray Is At Peace.I Only Knew Him For A Short Time At Work But He Was A Nice Man,and Good Boss.

My Deepest condolences too All of Rat’s family & friends. Now he gets to watch over what he loved most in the world ….his KIDS
Julie you & the kids be strong
Love The Addison’s

For some moments in life there are no words. My thoughts are with you Julie, the kids and your and Ray’s family

Ray, thank you for the fun moments we have shared during you army time here in Holland.
You will never be forgotten.