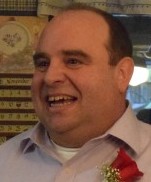 Michael David Heine was born September 10, 1965 in Bad Cannstatt, Germany where his Army parents were stationed. He left this world on April 20, 2017 in Plano, Texas.  He is survived by his husband, Kevin Sowell; his parents, Ron and Sandy Heine of Benbrook, Texas, his sister and brother-in-law, Annie and Marc England of Colorado Springs, Colorado; and his niece, Amanda England of Cheyenne, Wyoming.

For the past 22 years, he was employed first by MBNA, and then by Bank of America when they purchased MBNA. His final position held was Vice President, Production Services Lead.

In lieu of flowers, donations may be made in his memory to: Wounded Warrior Project or the charity of your choice.

Please enhance this tribute to Heine, Michael David by adding your condolences or memories. Click Here

I worked with Mike for a brief time at Furr’s Cafeteria. He made the time there great fun. It was a pleasure to have known him however briefly. My Sympathies to his husband and family.

I had the honor of knowing Mike for just a year, when he was in his 20's. He was quiet, meek, and humble, and though he did not know it at the time, his spirit helped me through a difficult period in my life, and I hope mine helped him as well. I believe we will all see him again, in a better place. Thank you, Mike, for simply being perfectly you.

What sad news, indeed. I had the pleasure of working with Mike during the early days of my 15 years with MBNA/BAC. He was always professional and very patient with repeated questions regarding his areas of expertise. My sincere condolences to Kevin and the rest of Mike's family.

Oh my, what sad news. Working with Mike was always a treat during my 18 years with MBNA/BAC. We recognized each other as fellow "happy people". The People of MBNA love Mike and will miss him. We send our condolences to Kevin and the rest of Mike's family.

God this hits so close to home. My thoughts, prayers and love are with you and the family. Our heaven has another angel. Many hugs and stay strong.

Mike was one of the best I know, he was kind and always available. I worked with Mike for many years both at MBNA and Bank of America. You will be missed.

Kevin--We are so sorry for your loss. Mike will be greatly missed. Please stay strong. God is with you. BIG HUG & prayers to you.

There are no words to express the feeling one gets when they have lost a friend and relative. May God shower you with the peace and love that only He can provide. Please take comfort in the thoughts and prayers that continue to wrap around you.

My prayers and thoughts are with you Kevin, and Mike's family. There isn't any words to lessen your pain and feeling of loss. Just remember all the fond memories. Love you

I'm so sorry for your loss Kevin, keeping you in my prayers. RIP MIKE... SOAR WITH THE ANGELS AS YOU NOW ARE ONE.