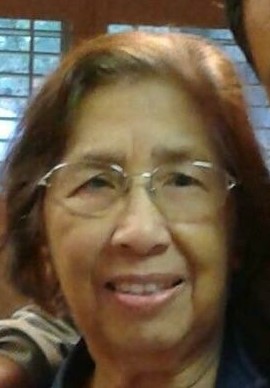 Remedios (Remy) Noble Escano of Carrollton, Texas passed away on Tuesday, January 16, 2018, at the age of 81. She is survived by her beloved husband of 56 years, Erlindo Escano, five devoted children: Joseph Escano and his wife Lisa of Dallas, Christine Escano of Carrollton, Guy Escano of Hurst, Paula Sotelo and her husband Gabriel of Carrollton, and Don Escano and his wife Zulema of Dallas; and ten grandchildren who loved their Lola: Megan, Amanda, Sarah, & Gabriel Matthew Sotelo, Madison, Gavin, Lukas, & Emma Escano, and Collin & Conner Escano. Remy was preceded in death by her parents, Gregorio and Remedios Noble, and siblings, Aida, Felicitacion, Eddie, George and Nathaniel.

Remy was born in Puerto Princesa, Palawan, Philippines on April 2, 1936. During WWII and at the age of only 6, she survived the Japanese invasion of the Philippine Islands by hiding in the jungle and, shortly after, was orphaned at the age of 9. Despite these traumatic childhood experiences, she later went on to graduate with high honors in nursing school and established a distinguished nursing career. Remy firmly believed in the power of education since it can never be taken away from you.

Remy graduated from St. Paul College of Nursing in the Philippines. She passed the board of nursing at the top of her class. In 1971, she moved to Dallas to begin working as a registered nurse in the NICU of Parkland Hospital. Remy worked her entire career at Parkland Hospital, and in 1992, she was awarded the Mary E. Mancini Award for Excellence in Nursing. After nearly 24 years of service, Remy retired in August 1995. Shortly thereafter, she began caring for the babies who were nearest and dearest to her heart, her grandchildren.

Remy had a deep faith in the Lord, her savior Jesus Christ and passed that on to her children and grandchildren. She always spread the love of Christ to everyone to whom she came in contact. Remy was a member of both St. Monica Catholic Church in Dallas and St. Ann Catholic Church in Coppell.  She also attended daily mass at St. Catherine of Sienna in Carrollton.

The family will receive friends at a visitation and viewing on Thursday, January 18, 2018 from 4:00 to 7:00 pm in the Brooks Family Chapel of the North Dallas Funeral Home, 2710 Valley View Lane, Farmers Branch, Texas 75234.

Please enhance this tribute to Escano, Remedios (Remy) by adding your condolences or memories. Click Here

Very sorry for your loss. My deepest condolences. Thoughts and prayers for the family.

Thoughts and prayers for the family and my our lord grant your mom eternal rest and peace.

I am so sorry for your loss, you're going through this difficult time, and I'm praying for peace for your family.

Paula and family- We are so sad for your loss.Although we did not know her, what a beautiful tribute to her life that was written. It looks like she had a full life with lots of children and grandchildren to love her. Sending prayers to the family during this difficult time.

I am terribly sorry to hear of your mother's passing. You and your family are in my thoughts and prayers.