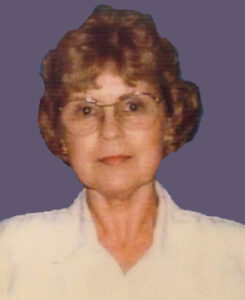 She graduated from Abilene High School and went to McMurry College for her first year.  She married Jerry Dean Walker and went to Texas Tech University, where she graduated with a BS in Education. They eventually moved to Kilgore, Texas, and were very active in the Methodist church.  The family move to Dallas in 1968, and she worked at Preston Hollow Presbyterian Day School as a Pre-School teacher.

Shirley loved genealogy and family reunions. She traced her own lineage back to the 1700’s, which earned her membership in Daughters of the American Revolution.  This was a source of great pride for her.  Shirley was very active in the Peters Colony Chapter of the DAR.

Shirley loved to travel with her family, especially to the beach.  She truly loved the sand, the sea shells, and the waves lapping onto the shore.

Shirley was a very kind, tender-hearted woman, and had a personality that people loved.  Her children have said that their high school friends would come back from college to visit Shirley, even knowing that her kids were not at home.

Shirley’s true loves in life were her four children, her daughters-in-law, and, most especially, her 3 grandchildren.  She loved to be involved with every family event.  She was a very loving and caring mother.

Services will be held at 3:00 p.m. on Monday, December 2, 2013 at First United Methodist Church of Coppell, 420 South Hertz Road, Coppell, Texas, followed by a reception.  In lieu of flowers, the family requests donations may be made to The Alzheimer’s Association, or a charity of your choice.

i remember your moms laughter. she was always smiling and had a sparkle in her eye. she raised four successful children and she knows each of you loved her very much.

What a wonderful life to celebrate. I’ll always remember Loos Field and the water tower. Thank you, Shirley.

We are so sorry to hear of your loss. Shirley was the epitome of a true southern woman. No one was a stranger to Shirley. Her gentle, gracious ways and old southern hospitality will not be forgotten. Rest in peace, Shirley. Alan, Amy, Sean, Neil and TJ

Dear Walker Family,
Please accept the condolences of a long ago friend from Abilene High School days. Shirley was a bright cheerful person who enriched the lives of those with whom she came in contact. Many fond memories. We were saddened that she was unable to attend our reunion in 2011.We trust your many great memories will sustain you during this time of loss.
G. Holman King
Abilene High School Class of 1951

I will always remember Shirley’s warmth and hospitality, but most of all, her innate sweetness. Shirley was very special, and a wonderful part of my childhood.

I was terribly sorry to hear this news of Mrs. Walker through a communication from Kelly Fry. She was such a nice and fun lady and any memory I have of her was always uplifting and positive. I am sorry for your loss. I hope you can all be comforted that she is whole again in eternal life. The Todd Heller Family.

I wish I could be there with you today. I loved your Mom so much. She was a tribute to you as a mother and to the things she loved that will live on in you. We will all miss her but remember who she was to all of us. I love you very much.

Leave a Reply to The Prendergast Family Cancel reply