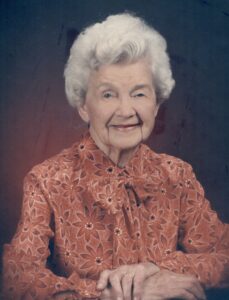 Elizabeth Nell “Betty” McLaury Thacker joined her Lord and Savior on February 20th 2014, at the age of 98 in Decatur, TX.

Betty was born August 31st 1915 in Birmingham, Alabama, to Cecil Rhodes and Robert Kinnear McLaury. She received an Associate’s Degree in Bookkeeping at a Dallas Community college and was a graduate of Sunset high school in Dallas,TX.

She grew up in Dallas with her sister Virginia and graduated from Sunset High School and Dallas Community College.  While living there, she met and married Ray Anthony Thacker.  Shortly thereafter they moved to Ardmore, Oklahoma, where their son Gregg was born.  They eventually moved to Parsons, Kansas, where they lived for many years.  Betty, Ray, and Gregg moved to Farmers Branch, TX, in 1961 where Betty began work at Nationmark Inc., where she was much beloved. As she once remarked, Nationmark finally allowed her to retire after working there until she was nearly 80.  At the same time, her volunteer work with Gift Shop at the Farmers Branch Historical Park gave her great joy and many close friends.

Betty was a member of St. Andrew’s Episcopal Church, having been a lifelong Episcopalian.  She served her church as a member of the altar guild, and had a rich life of playing bridge, working puzzles, collecting antiques, being involved with living history at the Historical Park.  She loved gardening, though she would never say she ever had a green thumb.

Betty is preceded in death by her parents, Robert and Cecil McLaury; husband, Ray Anthony Thacker; her sister Virginia McGill; her great-granddaughters, Wakanda and Yoluta Thacker and her nephew John A. McGill.

She is survived by her son Gregg Thacker, her Grandson Christopher Thacker and his wife Anna and her great granddaughters, Ayita, Kimana, Nakoma & Tehya Thacker, brother-in-law Charlie McGill, all of Decatur, Texas, and by her many nieces, and nephews and their children and grandchildren.

In lieu of flowers, donations may be made to the Alzheimer’s Association.

The family would like to thank Karen Walker, for being such a great friend to Betty. They would also like to thank Beth and all the staff at Heritage Place of Decatur and Drew with Integracare hospice of Denton.

Betty was a dear treasured friend and I will miss her terribly but I know she is happy now, with Ray in heaven.

I met Miss Betty through my daughter Karen Walker who loved her so much. Miss Betty was a delight and an inspiration.9FPnRa

Greg, your mom was a true treasure. A genuine lady who enriched my life from the time I was 12 years old. I will miss the many talks I had with her over the years. Hope you know how much she believed in you and how much she loved you. She will be missed by many. Our prayers are with you at this time.
Tracy and Kay