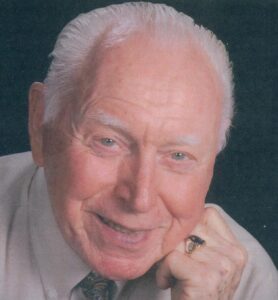 Ralph Frye Taylor, 85 of Addison, TX went to be with the Lord on Saturday, March 1, 2014.   He was born May 22, 1928, in Welch, West Virginia to Ira and Irene Taylor.  Ralph proudly served his country in the United States Air Force from 1950-1954.  He married Ethel Zaiser and they settled in Ellicott City, Maryland where they raised two sons, Glen and Gary.  The family moved to the north Texas area in 1979.

Ralph worked in several different positions for American Airlines and retired in 1994 after 39+ years of service.  He and Ethel opened the first Alphagraphics in Texas, Store #25 located in Farmers Branch, TX.  Later, they changed the name to Chase Printing and Graphics.  He was very active in the community, serving at his church, The Branch, in Farmers Branch, TX.  He was a member of the Farmers Branch Chamber of Commerce and Rotary Club.  He was also a member of the Masonic lodge and Toastmasters.

Funeral services will be held on Saturday, March 8, 2014 at 10:00 am in the Brooks Family Chapel of the North Dallas Funeral Home, 2710 Valley View Lane, Farmers Branch, Texas 75234.  Brother Eddy Ketchersid officiating.  Interment will follow the service at Bluebonnett Hills Cemetery in Colleyville, Texas.

Ralph will be greatly missed. He was an exceptional human being, and well liked by many. I am sad to lose such a good friend. I will miss his phone calls and cards. He was my friend in Texas and I will miss him very much.

May God soon welcome Ralph to his home in heaven and give consolation and peace to his family and friends who feel the pain of their loss.

There are five of Uncle Ralphs nieces and nephews here in PA. With broken hearts over the loss of a very loved and respected man. We have comfort in knowing that he has probably been reunited with our mother (Alice) his sister in heaven and they are dancing and singing like two children who have found each other once again. Glen, Gary and your family, know that you are in our hearts and prayers.

It was an honor to have known Ralph, a prince of a man, for the last 30 years. We salute his military service and the graceful life he lived. There is no doubt that he now rests in peace with his beloved Ethel, Glen and Gary, our thoughts are with you and your family.

Uncle Ralph was such a kind and beloved member of our extended family. Max, my dad, and VeNeta, my mom, enjoyed his frequent calls with updates from him on the family news. He will be missed very much by my parents, and me and my brother and sister. You are in our thoughts and prayers. We send our love to Uncle Ralph as he joins our family members who have gone before him. Paula, Leigh Anne, Alan, Max and VeNeta.