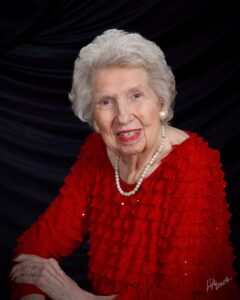 Devoted mother, loving wife, much loved grandmother Mildred Catherine Eaker, 91, died on June 24, 2014 in Dallas Texas after six days of illness.  She was a friend to all she met with amazing graciousness and hospitality.  To her grandchildren and others she was “Gramer” always there with a warm smile, a story to tell, and cards to play.

Mildred lived her life in service to others.  Wherever she lived she volunteered her time to help others.  She served the church for many years as a Sunday School leader for children and youth, as well as a leader of women’s groups.  She was a member of Christ United Methodist Church in Farmer’s Branch, TX. She was a census taker for 5 censuses starting in 1960 in West Virginia and ending in Ohio in 2000.

Mildred grew up in Clinton, MO but after her marriage she willingly moved with her husband’s job reassignments to Silver Springs, MD (University of Maryland), St. Louis, MO, St. Albans, WV, Akron, OH, Put-In-Bay, OH and Dallas, TX.  She and her husband Charley spent their retirement years on South Bass Island in Lake Erie, where Mildred entertained their constant stream of company.  They were members of St. Paul’s Episcopal Church and greatly enjoyed island life and the many friendships they formed.

She is preceded in death by her parents, Robert & Lecine Staples, her husband, Charles, and two brothers, Robert Staples, Jr. and Richard Staples.