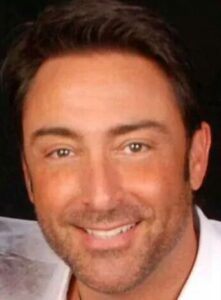 He was born in Hereford, TX on June 28, 1967 and grew up in Carrollton, graduating from Newman Smith High School in 1985. He is the loving husband of Shelley Rainey; devoted father to his son, Joshua Rainey, age 13, and daughter, Lexi, age 10, of Lewisville. For all those who ever knew him he brought joy and faith to our lives. We caught his faith by watching his life. His commitment to excellence and integrity preceded his name. Steve recently became an ordained minister, fulfilling his calling. We will miss him, his playful humor, humble spirit, his wise words and his warm heart.

He is preceded in death by grandfather, Hollis Rainey, Tishomingo, OK and A. D. Southard of Abilene; grandmother, Effie Patrick Shreveport.

Celebration of Steve’s life will be Thursday July 10 at 2:00 pm in the Brooks Family Chapel of the North Dallas Funeral Home, 2710 Valley View Lane, Farmers Branch, TX 75234.  Visitation will be Wednesday July 9 from 6-8pm at the funeral home.

Steve, I will always love and miss you. You are in the arms of an angel now. You are in our hearts and memories forever.
Love, Rhonda

I am so very sorry for your loss. I was in Steve’s D! class. I don’t remember how the conversation started but I accused him of being a snob. He wrapped his arms around me, gave me a big hug, and said, “Would a snob do that?”. We were instant friends. He was so incredibly special, and really stood out in our class. I am so glad that I was able to experience his energy in person, even though it was for such a short time. Thank you for sharing him with us. Hugs and prayers, Georgie

Dear Family,
Words cannot adequately express our sympathy for your loss. Our love and prayers are with you and may the Lord bless you with peace and loving memories.

Steve had a unique way of bringing joy, warmth, and fun to those whom he knew. He was an easy guy to love and embrace. His love for Jesus and heart to serve others was incredible. We loved Steve!! Our prayers and love go with Shelley and the kids and the entire family. Steve loved them with his whole heart.

Pam, My deepest condolences on the loss of Steve. May the pace of our Lord be with you now and always.

We are so sorry to hear of the loss of such a wonderful person in our world. May the Lord be with you, bless you and keep you in his hold….in the arms of Jesus.

We are so sorry for your loss. Our prayers are with you.

We were deeply saddened to learn of Steve’s passing. Our thoughts and prayers are with you all.

Steve Rainey…..how could we expect to grow…if there had not been for any rain! Steve…or as I call you…Rainman.. you have rained the Word of God amongst us. Pouring out the love of Jesus.. May the love of Jesus Reign in the hearts of Shelly and as we know will also share with his beautiful and blessed children as well as in our lives. As for me…gone too soon. Love you but God loves you more. RAINEY DAYZ…TO MY AMAZE. I shall never forget. GP KCBI RADIO 90.9 FM and at http://www.KCBI.org

I am shocked to hear this sad news. Steve was one of the hardest working basketball players I ever had the privilege of coaching. But more importantly, he was one of the finest young men that I have ever been around. I am so sorry to have missed the Memorial Service but have been out of town for the entire week. It is still hard to accept this sudden loss, but we know God is good. Please know prayers are being lifted up for the entire Rainey family.

Our thought and prayers are with you during the very difficult time.