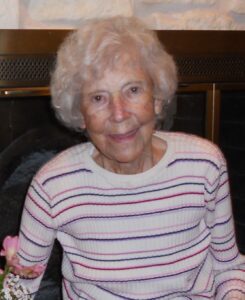 Marjorie May Stratton, Small in stature but a giant in wisdom, grace and grit. Marjorie was born Marjorie May Bowen in Halesowen, England February 15, 1922 to Harry and Maggie. Marjorie immigrated with her family to New Zealand in 1924 where she grew up with her sister and four brothers on a dairy farm. Her eldest brother remained in England. She served in the New Zealand Army Signal Corp during WWII. It was during this time that she met and married her husband, Robert Boyce Stratton Jr., a USA Navy Medic stationed in Auckland. In late 1944 she boarded a troop ship and traveled to New Castle, Pa to be with her husband. It was there that she raised her two children, Marjorie Ann (Kiwi) Cutler and her son Robert Boyce Stratton III. In 1977 she and Robert Jr. moved to Winter Park, Florida for their retirement years. Robert Jr. died in 1996 but Marjorie remained in Winter Park until 2010 when she moved to Farmers Branch, TX to live with her daughter and granddaughter. In addition to her children Marjorie Cutler of Farmers Branch, TX and Robert Stratton III of Elkhart, IN she leaves behind two grandchildren, Kimberly May Cutler Clem of Farmers Branch, TX and Robert Stratton IV of Winter Park, FL, and daughter in-law Diane Stratton of Elkhart, IN. In lieu of flowers donations may be made to The Farmers Branch Senior Center, PO Box 819010, Farmers Branch, TX 75381-9010 where she enjoyed good friends, exercise classes and cards or to Good Shepherd Episcopal Church, 11122 Midway Rd, Dallas, TX 75229 whose loving church family embraced her during her years in TX. Services will be held at Good Shepherd Episcopal Church on Tuesday, July 15th, at 2:00 PM. Marjorie will be buried next to her husband in Winter Park, FL.