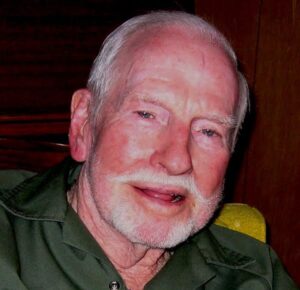 George Walter Smith, born January 28, 1923 in Cement, OK, passed away July 17, 2014 at the age of 91. George moved with his family to Houston as a baby. There he met the love of his life, Mabel. At age 19 the two were married, one week before he was deployed to the Pacific Front during World War II. George achieved the rank of Corporal as a radioman with the parachute troops in the Fifth Marine Division. He survived the battles on Iwo Jima and climbed Mt. Suribachi to see Old Glory waiving proudly. After the war, he graduated from the University of Houston with a degree in Mechanical Engineering. He loved flying, smoking cigars with friends, watching his favorite sports teams, his Sunday School class and spending time with family.

George was preceded in death by Mabel, his wife of 63 years.

Donations may be made to VITAS Hospice or the Wounded Warrior Project.

Teta, praying God comforts you and each family member during this time of great loss. I know it gives y’all great peace that he is with his heavenly father.

To me George Walter Smith was just Uncle G. For almost 10 years I toured with Walmart. Making personal appearances for Walmart. If I was anywhere close to Dsllas, Texas, I could always count on Uncle G to showed up. He was there to encourage me and talk to me about Jesus, my Dad, his only brother, Teta, Deborah and Tonya. He was more than an Uncle he was a friend. I loved him and admired him. I greatly enjoyed our visits and what a sense of humor. I loved his laugh. He so proud of his 3 daughters and their Friday night meals with them. Teta, Deborah and Tonya I am praying for you.