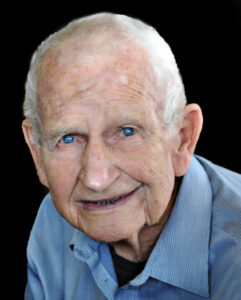 Charlie L. (Ludie) Deaton, 83 of Garland, passed away Sunday, July 20 at his residence. A Memorial Service will be held on Wednesday, August 13 at 11:00 a.m. at Prestoncrest Church of Christ, 6022 Prestoncrest Lane, Dallas, Texas 75230 with Dr. Gary Brantley officiating. There will be a reception at the church in Fellowship Hall following the service.

Charlie was born on February 2, 1931, son of John and Ruby Deaton of Floyd, Texas. He was married to his childhood sweetheart, Helen Norris, on July 15, 1948 in Dallas. He worked at Elliott’s Hardware for many years before he retired.

He is survived by his daughter, Vicki LaRoe of Garland; daughter-in-law, Lisa Deaton of Hamilton, Ohio; sister, Doris Coleman of Greenville; uncle, Jimmy Morris of Dallas; grandchildren, Trey LaRoe of Brushy Creek, Jake LaRoe of Mesquite, Marla Hughes and her husband, Darren, of Murphy, Evan Deaton, of Cincinnati, Ohio, and Cara and Anna Deaton of Hamilton Ohio; great-grandchildren, Samantha LaRoe of Bryan, and Preston, Elic, Holden and Ren Hughes, all of Murphy; and many nieces, nephews and friends.

He is preceded in death by his parents, his wife, his son, Lt. Col. Gary Deaton, and 3 brothers, Billy, Raymond and Bobby Deaton.

Donations in lieu of flowers can be sent to

One condolence on “Deaton, Charlie L.”

My Mother(Dorothy Neal) and myself worked with Ludie for many years at C & S hardware he was a great and loving man. He will be sorely missed. R. I. P. My friend. Love to his kids. Sandra