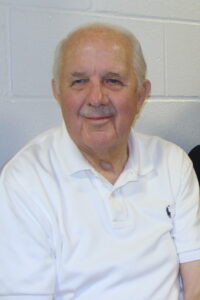 Harry (Buck) Anderson passed away on August 7, 2014 with his family at his bedside in Irving, TX.

Buck (as he preferred to be called) was born in Tallulah, Louisiana, to Harry and Sarah Anderson. After serving in the Navy and Army, he graduated from Northwestern State University of Louisiana. He then joined the US Air National Guard where he served 20 years and retired with the rank of Lieutenant colonel.

Buck also had a passion for sports that was second to none; he especially loved LSU football. If there was a sport with a ball, Buck was watching. One could always find Buck watching all of his grandkids play sports. You could pick him out in a crowd; he was the one with the binoculars.

He was the life of the party. Buck never met a stranger, he loved people and everybody loved him.As a proud grandfather, he always preferred to be in the company of his grandchildren whom he loved with all of his heart. These grandkids kept his heart young.

Buck is survived by his beloved wife of 39 years, Betty Anderson; his son, Steve Anderson and Steve’s wife, Nancy; his daughter, Margaret Anton and Margaret’s husband, Harley; his sister, Joyce Anderson Roach Jackson. He will be affectionately remembered by his step-son, Rick Petrasic of Carrollton; three grandchildren, April Taylor and her husband, Tim, Dr. Jason Petrasic and Kristen Petrasic, and one great-grandchild, Chase Taylor;along with a far-reaching circle of friends and relatives who will remember him for his encouraging words and his generous spirit.

The visitation is Monday, August 11, 2014 (6:00-8:00 pm) at the North Dallas Funeral Home in Farmers Branch, TX. Family and friends will celebrate Buck’s life at 11:00 am on Tuesday, August 12, 2014 at the Victorious Life Assembly of God Church in Lewisville, TX. His internment with Military Honors will follow at the DFW National Cemetery in Dallas, TX.

Buck is safe in His Arms, now and forever.

One condolence on “Anderson Jr., Harry”

Betty, we are so sorry for your loss. Buck was such a great guy and a wonderful friend. Our prayers will be for strength and comfort, for you and your family.